This event provided the latest development and technology in biometrics, such as face recognition, iris recognition, fingerprint, and others. Especially, finger vein authentication technology attracted great attention at the conference, since Proline announced the participation in the Turkish national project, “Biometric Authentication Project” launched by SGK (the Social Security Institution of Turkey).

mofiria’s President & CEO, Satoshi Amagai, had an opportunity to make a speech at this conference. He talked about mofiria’s unique authentication technology, the global biometrics market overview and the potential for future growth of the market. 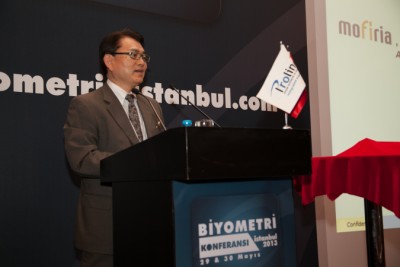 (Amagai was commended the best speech by Proline）

Through this conference, mofiria has become known better in Turkey, and also received a lot of inquiries from many companies in the neighboring countries which attended the event.